In Stalin’s Cave: Art as Testimony to the Disputed Borders of Contemporary Georgia 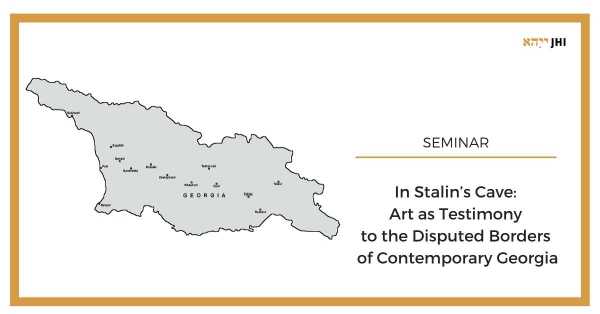 We would like to invite you to "In Stalin’s Cave: Art as Testimony to the Disputed Borders of Contemporary Georgia," a seminar by prof. Stephenie Young (the Salem State University Center for Holocaust and Genocide Studies in Massachusetts)

Although the small nation of Georgia may not be on the current media radar of problematic spaces in the globe, its border problems are active and real and a microcosm of greater political issues in the Caucasus region. And for Georgians themselves a constant concern and source of discussion is the politics of their country, the strained relationships with their neighbors, and the question of the fluidity of their borders. My presentation focuses on how this concern with borders is filtering into contemporary Georgian culture and, specifically, how it is viewed through the lens of contemporary art coming out of the country.

Stephenie Young is a professor in the English Department and research associate for the Salem State University Center for Holocaust and Genocide Studies in Massachusetts. She completed her Ph.D. in Comparative Literature at the State University of New York, Binghamton. Her forthcoming book, "The Forensics of Memorialization," is about the "forensic imagination," and how traumatic material culture is used to create visual narratives that shape memory politics in post-conflict former Yugoslavia. She is also engaged in several other projects including a photo/text study about forensics, material culture and politics at the U.S./Mexico border and a multi-year study about witnessing and borders through the work of contemporary Georgian artists. She is a Senior Fellow at the Jewish Historical Institute in Warsaw, Poland during fall 2019.

The seminar will be held in English. It will take place in a meeting room located in the Blue Tower (entrance from Tłomackie Street).

Link to the event (source)