Tours on traces of so called Small Ghetto of Warsaw 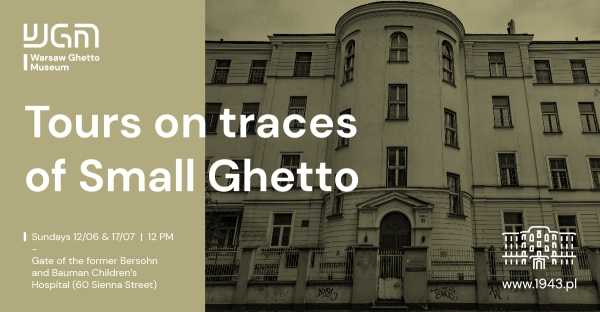 The Warsaw Ghetto Museum invites you to our guided tours on traces of so-called ‘Small Ghetto’ of Warsaw.

Guided tour covers selected points in topography of the former area of Ghetto in Warsaw – a significant part of it, called Small Ghetto. Starting point is gate of former Jewish Children Hospital (Bersohns&Baumans families’ Hospital) at Śliska Street 60 – future headquarters of Warsaw Ghetto Museum; we will visit grounds of the hospital also.

Then as follow: the remains of Ghetto Wall – between Żelazna and Śliska streets; place of Norblin Plant, site of some factories (so called “shops”), active in Ghetto between Summer 1942 and Spring 1943 – at Prosta and Żelazna streets; remains of apartment quarters – at Waliców and Pereca streets, and Żelazna and Krochmalna streets; places of one of the most important gates of Ghetto – at Żelazna and Grzybowska streets, and of famous and notorious wooden bridge connecting so called Small and Big Ghetto over Chłodna street; a tenement house “Under Clock” at Chłodna street – where a part of elite of Ghetto residents lived (among them – Adam Czerniakow, chairmen of Judenrat/Jewish Board); place of former Biała street – one of important connections between Ghetto and “Aryan site”; Mirów-Market halls – important place of food smuggle to Ghetto; place where until 1945 stood the building-seat of Judenrat – at Grzybowska street; the only one survived historic Synagogue, Nożyk Family’s Synagogue – at Twarda street; and as a last stage – Grzybowski Square, one of the hearts of pre-war Jewish district, during the War – a place of existence of small community of Jew-Christians connected with All Saints Church, and a place adjoining to survived block of apartment houses at Próżna street.

This stages will be a kind of reference points to narration about selected aspects of history of pre-war Warsaw’s Jewish Community and Warsaw Ghetto during the war, as: administration, religion, health care, food supply, trading, employment, culture, common life and death and also the politics of memory/oblivion about Ghetto after the War. The content of actual outdoor temporary exhibition of the Museum on Grzybowski square also will be reported.

The guide will be Dr. Paweł Freus – an art historian, Senior Specialist in the Research Departement of the Warsaw Ghetto Museum. Participation is free of charge. The tour will be conducted in English.