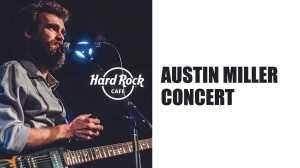 📌 Place: Warsaw - Śródmieście dist., Hard Rock Cafe Warsaw, Złota 59 (show on the map)
share tweet
Austin Miller’s interest in music emerged at a young age. Raised all-American on Springsteen, Petty, and piano lessons starting at 3 years old, there was rarely a moment when a radio wasn’t playing or a record wasn’t spinning. But it wasn’t until college that he began putting pen to paper, thanks to a week-long Dylan binge.

Today, those influences have been met with a short history of shows spanning 40 states and 13 countries. Miller exerts a worldliness beyond his 27 years -- not only in his confident croon, but also in his rambling rhythm and thoughtful guitar work.

Over the years, inspiration has continued to strike just like that original Dylan-fueled kick did: without warning, yet beautifully timed.

It’s the combination of lonely stretches of highway between gigs out west, or short amount of time at home before wanting to get back on the road, that these songs come to fruition. When he finds the time to reflect, it results in a certain nostalgic and refreshing take on the classic Americana from which he draws so much influence.

In comes “Engine”: his third and most ambitious album yet, on which Miller exudes his stories of love and loss in understated, calculated, and skillfully-crafted hooks that leave listeners with just the right taste of melancholy in their mouths.

The record is supported by a dynamic group of musicians originally assembled to tour behind his last album, “More Than One Way”. Touring seems to be the time and place that Miller’s life makes the most sense, and the group stuck around to work diligently on “Engine”. Over the span of its 39 minutes, Miller gently asserts his voice and tone into the forefront, and the tactful accompaniment carries the soft melodies the rest of the way home.

In “Skeleton Keys” he sings: “I will rest when it’s assured that I have no reason to be awake.”

Seems like he has yet to find that chance to rest, and we’re all better for it.