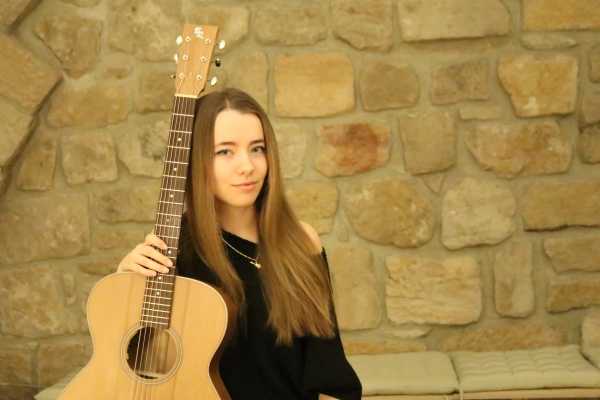 Julia Lange is a 20 years old german crossover guitarist. She started playing at the age of 8 when she saw her older brother playing. In the following years she took classical guitar lessons with Elisabeth Becker, Fritz Ludwig and at last from 2011 to 2015 with Stephan Werner at the Dr.Hoch’s Conservatory in Frankfurt.

At the age of 15 she played her first solo concert, one year later she took part in a concert tour through Chile with the Youth-Guitar-Orchestra of Baden-Württemberg and was invited to play for important german politicians like Volker Bouffier and Wolfgang Schäuble in Berlin.
Because of her succesful YouTube Channel Julia’s prominence around the world is growing and growing. She was invited to play concerts in France, Spain and even Hongkong.
Her first TV-appearance was a portrait of her for Main.TV in 2015. Two years later Julia performed for the German/French TV Show „Stars von morgen“ (Channel: ARTE) where she played classical as well as Fingerstyle guitar and even accompanied the presenter oft the show: the famous tenor Rolando Villazón. Moreover she gave an interview and performed for the Hongkong TV-Channel RTHK at "The Works".

After years of playing mostly classical guitar Julia became more and more a crossover guitarist. She taught herself how to arrange songs and established a loyal following on social media platforms.
The mixture of different styles makes her arrangements so unique.
In September 2017 she started studying acoustic guitar at the „Hochschule für Musik Carl-Maria-von-Weber“ in Dresden and even got the sponsorship „Deutschlandstipendium“.