Islam and Democracy! Is Islam compatible with democracy? 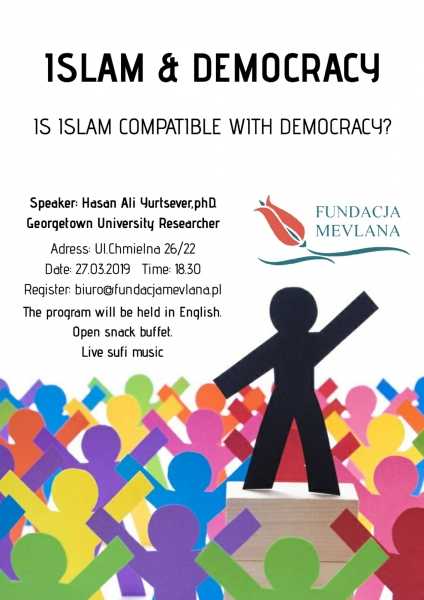 Place: Warsaw - Śródmieście dist., Chmielna 26/22 (show on the map)
share tweet
In contrast to any claims, Islam is not a political ideology, it is a religion. To reduce Islam to a political ideology is the greatest crime against its ethos. The “state” is a system formed by human beings in order to protect their basic rights and freedoms and maintain justice and peace. The “state” is not a goal by itself, but an agency that helps people pursue happiness in this world and in the afterworld. Therefore, the phrase “Islamic state” is a contradiction. A state is a result of a contract among humans, made up of humans, and it can neither be “Islamic” nor “holy”. Participatory form of governance, whether it is called a democracy or republic, is much more in resonance with the Islamic spirit than other forms of government, including monarchies and oligarchies.
We invite you to question and reveal the relevance of Islam and democracy. We cordially invite you to join us for raising awareness about this issue and find answers for such questions like:
Is democracy totally incongruent to Islam?
On what grounds democracy and Islam can be shown to be equal and on which grounds these are mutually exclusive?
Is Islam the reason many Muslim countries are not democratic?
What are the main reasons so few Muslim nations are democratic?
What are the religious ideals within Islam that could favor democracy?
Are democratic interpretations of Islam gaining ground in the Muslim world?

Hasan Ali Yurtsever is the muslim faith advisor at Benedictine University in Illinois. He was the president of the American Islamic College from 2012 to 2016. He earned his B.S. from Boğaziçi University and M.S. and Ph.D. from Ege University and tought in the math department at Georgetown. He was the president of the Rumi Forum in D.C., an organization founded in 1999 to promote interfaith and intercultural dialogue.