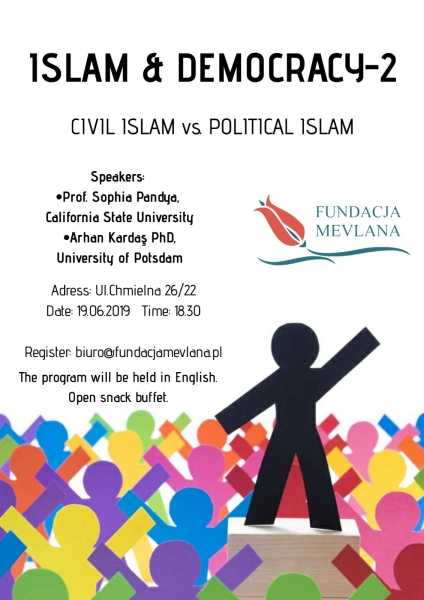 Over the last few decades, Islam has become a central point of reference for a wide range of political activities, arguments and opposition movements. Contrary to what Islamists would argue, Political Islam is only one of the interpretations of Islam by Muslims. In an alternative Islamic understanding that might be broadly described as “Civil Islam,” Islam isn’t corrupted or transformed into a political ideology, nor is it state-centric. Instead, the main focus of Civil Islam is on the spiritual development of individual Muslims and the promotion of the general conditions for human flourishing, including a robust civil society, human rights, religious freedom, peace, ethics, social justice and economic development, the rule of law, and so on. We cordially invite you to join us for raising awareness about this issue and find answers for such questions like:
Does Islam aim to build an apparatus of state or to design a society or rather a community?
Is Islam in its essence political, or does it have the potential for politicization?
What is political Islam? How does one observe the manifestation of political Islam?
Are the Islamists merely using some democratic ideas as slogans to cloak their real agenda?
If power is the real agenda of the Islamists, what consequence would this have on Islam and the world of Islam?
Is Islam the reason many Muslim countries are not democratic?
How does the record of democracy in Muslim countries compare to that of other regions of the developing world?
What are the main reasons so few Muslim nations are democratic?
What are the religious ideals within Islam that could favor democracy or oppose democracy?
Are democratic interpretations of Islam gaining ground in the Muslim world?

Sophia Pandya is currently a full professor at California State University at Long Beach, in the Department of Religious Studies. She received her BA from UC Berkeley in Near Eastern Studies/Arabic, and her MA and PhD from UC Santa Barbara in Religious Studies. A Fulbright scholar, she specializes in women and Islam, and more broadly in contemporary movements within Islam.

Arhan Kardas is a lawyer and historian. He received his doctorate in Erlangen on the equality of women in Islam. He studied Law, Philosophy at Ankara University and History at Bilkent University. He is the editor in chief of the Fontane magazine. In addition to Turkish, he speaks English, German, Arabic, Persian and Latin.