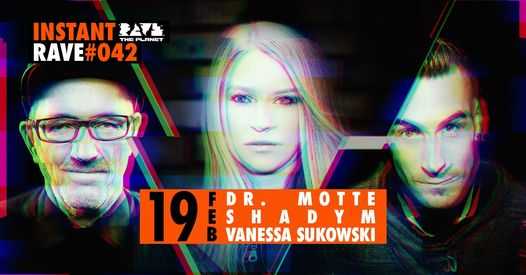 𝗘𝗤𝗨𝗜𝗩𝗔𝗟𝗘𝗡𝗧 𝗥𝗘𝗖𝗢𝗥𝗗𝗦
With a focus straight on Techno, the young label by Vanessa Sukowski stands for no limits to creativity and inspiration and has already a strong identity and a clear vision: Equivalent releases are related and dedicated to the German Techno capital and it’s special places and areas. Each release stands for itself as an independent work of art consisting of the track, the track name, a music video and the story behind it.

𝗦𝗛𝗔𝗗𝗬𝗠
𝙴𝚚𝚞𝚒𝚟𝚊𝚕𝚎𝚗𝚝 𝚁𝚎𝚌𝚘𝚛𝚍𝚜 𝚊𝚛𝚝𝚒𝚜𝚝𝚜
Robb Metzger aka Shadym has been a part of the Techno scene as DJ and Producer for many years now. He is frequently seen at the top of DJ Charts whether alone or in collaborations together with Niereich as: “Niereich vs. Shadym”. In recent times Robb has been releasing many Ep’s, 1 LP and many remixes constantly entering the Beatport Top100.

𝗩𝗔𝗡𝗘𝗦𝗦𝗔 𝗦𝗨𝗞𝗢𝗪𝗦𝗞𝗜
𝚏𝚘𝚞𝚗𝚍𝚎𝚛 𝚘𝚏 𝙴𝚚𝚞𝚒𝚟𝚊𝚕𝚎𝚗𝚝 𝚁𝚎𝚌𝚘𝚛𝚍𝚜
With great musical sensitivity and a big passion for Techno the likeable German DJ, Producer & Labelhead of Equivalent Records is providing her listeners with driving and hypnotic basslines. By combining the natural beauty of raw and banging Techno music and her weakness to reimagine 90’s acid & techno classics she lifts her sets to another level. National and International stages became her natural habitat. She combines the best credentials for a rising artist in Techno music.

𝗗𝗥. 𝗠𝗢𝗧𝗧𝗘
𝚏𝚘𝚞𝚗𝚍𝚎𝚛 𝚘𝚏 𝚁𝚊𝚟𝚎 𝚃𝚑𝚎 𝙿𝚕𝚊𝚗𝚎𝚝
If you are watching this stream there is probably no need to introduce the Father of the Love Parade and co-founder of Rave The Planet! As a longtime supporter and friend of Equivalent Records, Dr. Motte decided to join this stream himself and share the decks with Shadym and Vanessa just like in the good old days at various Techno clubs in Berlin.