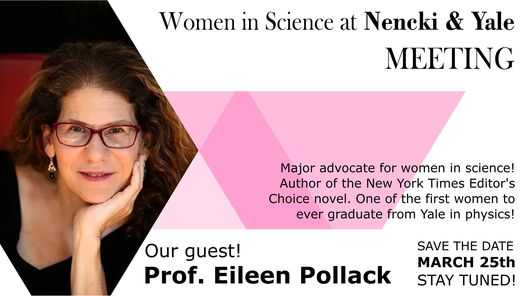 As Women in Science at Nencki (WISaN), an initiative advocating for gender equality and promoting the interests of female scientists, we are pleased to invite you to our upcoming special event! 🤩
In collaboration with Women in Science at Yale, we are organizing an international meeting with Eileen Pollack - a major advocate for women in science, author of the New York Times Editor’s Choice novel, and one of the first women to ever graduate from Yale in physics.
The main part of the meeting will be a Zoom Webinar, starting off with an in-depth interview when you will have an opportunity to learn about our Guest’s perspectives on issues like gender equality in science and her experience in gender-based discrimination.
At the end of the meeting, we will have an international networking session, when you will be able to actively participate in a discussion and share your own story and experiences with other Academics from leading scientific institutions from Poland and abroad.

How to sign up: This will be a registered-only event.
You can register by using this link: link

Eileen Pollack is one of the first women to graduate from Yale University in physics. She earned an MFA from the University of Iowa, where she was awarded a Teaching-Writing Fellowship. She is the author of fiction and non-fiction novels as well as numerous essays and articles 🧠.
In 2015 she published an inspiring autobiographical book "The Only Woman in the Room: Why Science Is Still a Boys’ Club", in which she examines the social, interpersonal, and institutional barriers women and minorities face in Academia An excerpt from it was also published in The New York Times magazine 📰.
In her creative nonfiction book "Woman Walking Ahead: In Search of Catherine Weldon and Sitting Bull", EileenPollack restores a little-known advocate of Indian rights to her place in history. The book won a WILLA finalist award and Jessica Chastain starred in its film adaptation.